Princess Sirindhorn Astronomical Park is the headquarters of the National Astronomical Research Institute of Thailand (NARIT). Located in the northern province of Chiang Mai, the park is a place for the latest research and development of space technology, academic services, and astronomy education. It is the largest and the most modern space science center in Thailand, and includes a planetarium, observatory, and a multi-purpose outdoor educational venue.

It is an essential academic and tourist destination of Thailand and Southeast Asia.

In 2017 Fulldome.pro was chosen to build a 17 m diameter planetarium, which was the 5th and most significant project completed by our team for NARIT so far.

We engineered and installed a 360-degree digital planetarium with 160 seat capacity, 12 laser  projectors, and 5K actual dome image resolution. Fulldome.pro project management team handled the construction process, which included installation and integration of equipment with the interior design, ensuring that all safety and operation requirements for public places are met. In addition, a team of subcontractors was hired to complete interior design and HVAC installation in the planetarium room.

"We believe that immersive technology can transform the way we learn and educate. At Fulldome.pro, we provide turnkey solutions for engineering and building planetariums from the ground up as well as cost-effective upgrades of dome screens, AV equipment, media servers, etc."

Technological innovations that we implemented in this project

To fulfill all the requirements of this exciting project, Fulldome.pro engineering team once again came up with some innovative solutions.

We are confident that these solutions will be a new sector standard.

Watching a bright screen in a dark room can strain the eyes. Bias lighting uses soft light behind or around a screen to reduce the apparent brightness and thereby reduce fatigue. This has been known since the early days of television. In the early 2000’s Philips introduced its Ambillight (AKA Ambilux) technology with dynamic bias lighting that extended the colors on the screen beyond the bezel of the television. This not only reduced viewer fatigue but also increased immersion.

Fulldome.pro is the first to bring this idea to the dome screen. After  several months of R&D and an upgrade of our media server software, we have now extended the already immersive dome screen further by adding dynamic bias lighting to the walls of the planetarium! The edges of the every projected are analyzed for color, saturation and brightness, in real-time, and sent to the LEDs around the outer perimeter of the dome.

In this project, 1,560 individually addressable RGB LEDs were installed around the 52-meter circumference of the screen.

The good news is that Bias Lightning and the latest version of Fulldome.pro Media Server software are now available for all projection dome projects. 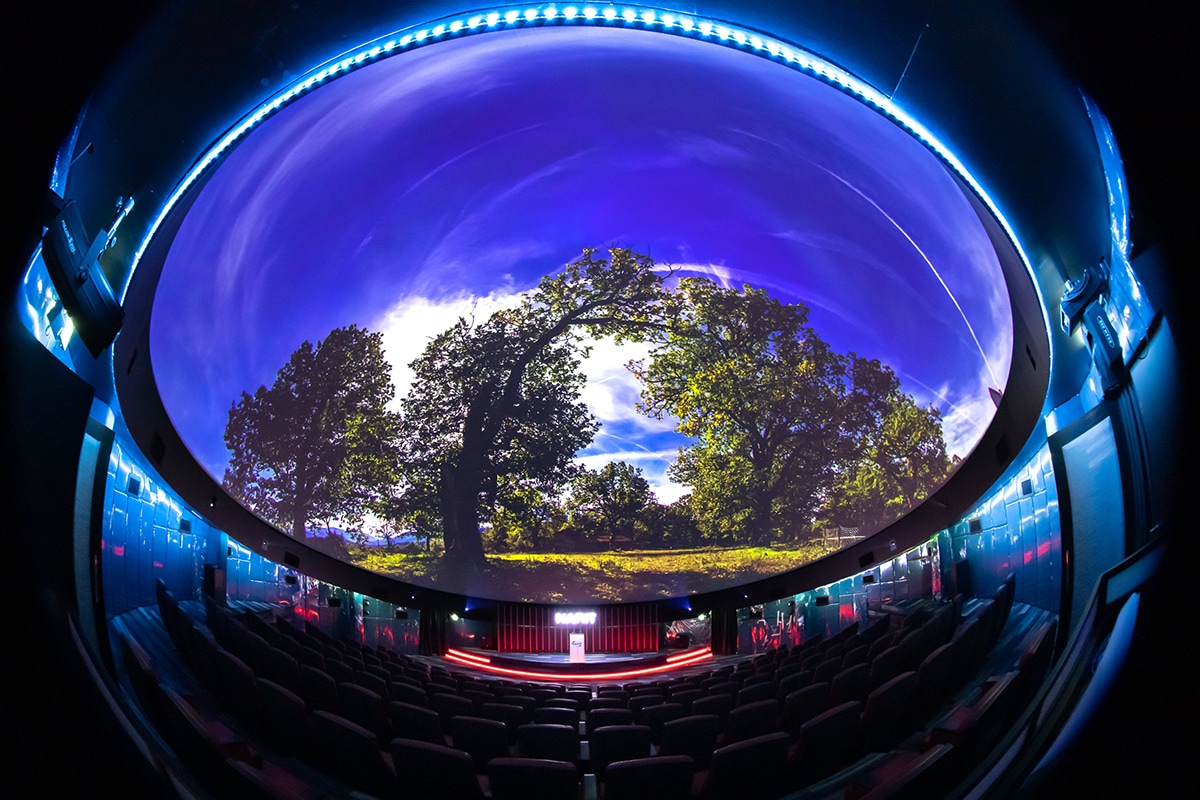 Negative-pressure fabric screen technology, pioneered by Fulldome.pro, means that dome screens can be installed or upgraded quickly and more economically than rigid screens. They also make high-quality portable domes possible. However, large negative pressure screens, particularly in extreme climates can change shape and position slightly due to wide fluctuations in outside temperature and air pressure. The vacuum fans that hold the negative-pressure screen in place usually operate at a constant speed, but if the atmospheric pressure outside or inside the dome changes the relative pressure can change causing the screen to move from the position it was in when it was calibrated. The movement may only be very small but it may occur several times a day requiring frequent calibration and inconvenience.

To overcome this, our engineering team installed a special sensor to regulate the fan speed and maintain constant pressure in the screen envelope. This technology helps to eliminate screen movement and the need for recalibration, saving staff time, keeping the planetarium operating and visitors educated and entertained throughout the day. 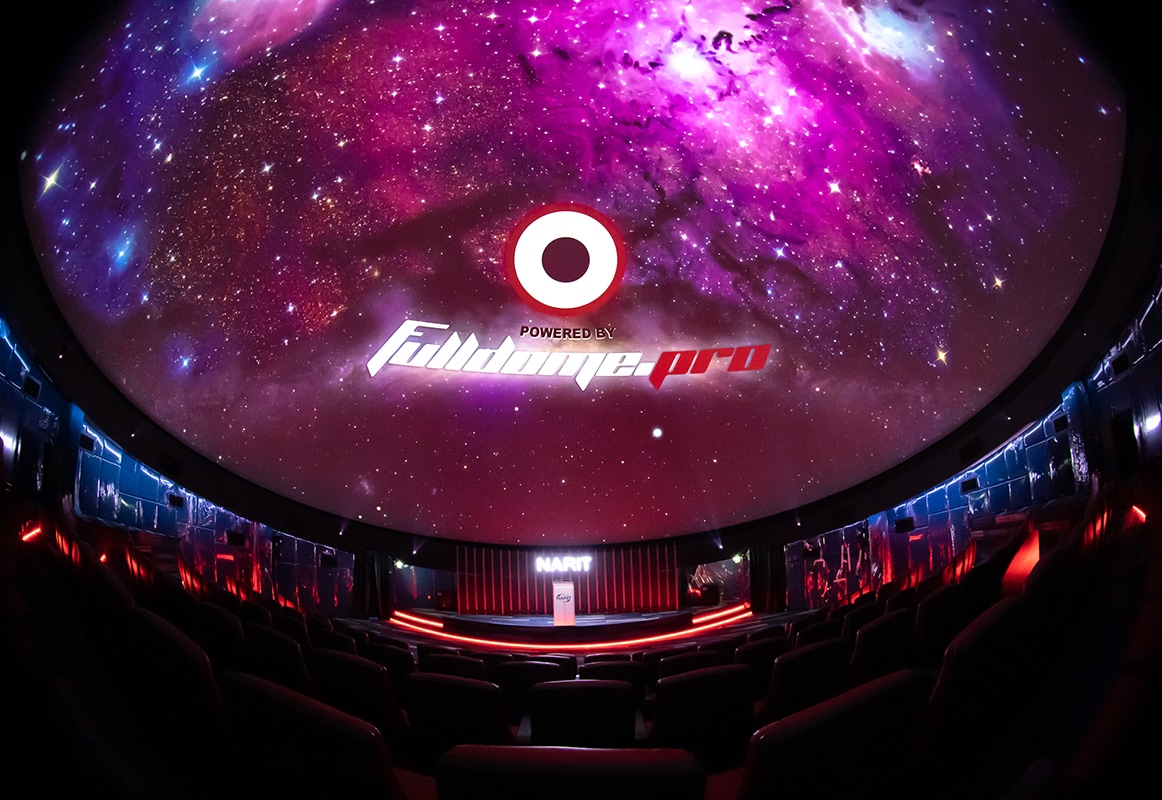 By pairing the Fulldome.pro Media Server with carefully selected projectors we have been able to produce a dome picture of the highest quality. Once again, every frame is analyzed and the brightness of the projectors adjusted, in real-time, to achieve maximum contrast. The dynamic brightness adjustments are synchronized across all twelve projectors.

As an added bonus, because the projectors are not always operating at maximum brightness, the lifespan of the laser light-source is extended from 20,000 hours to around 30,000 hours. 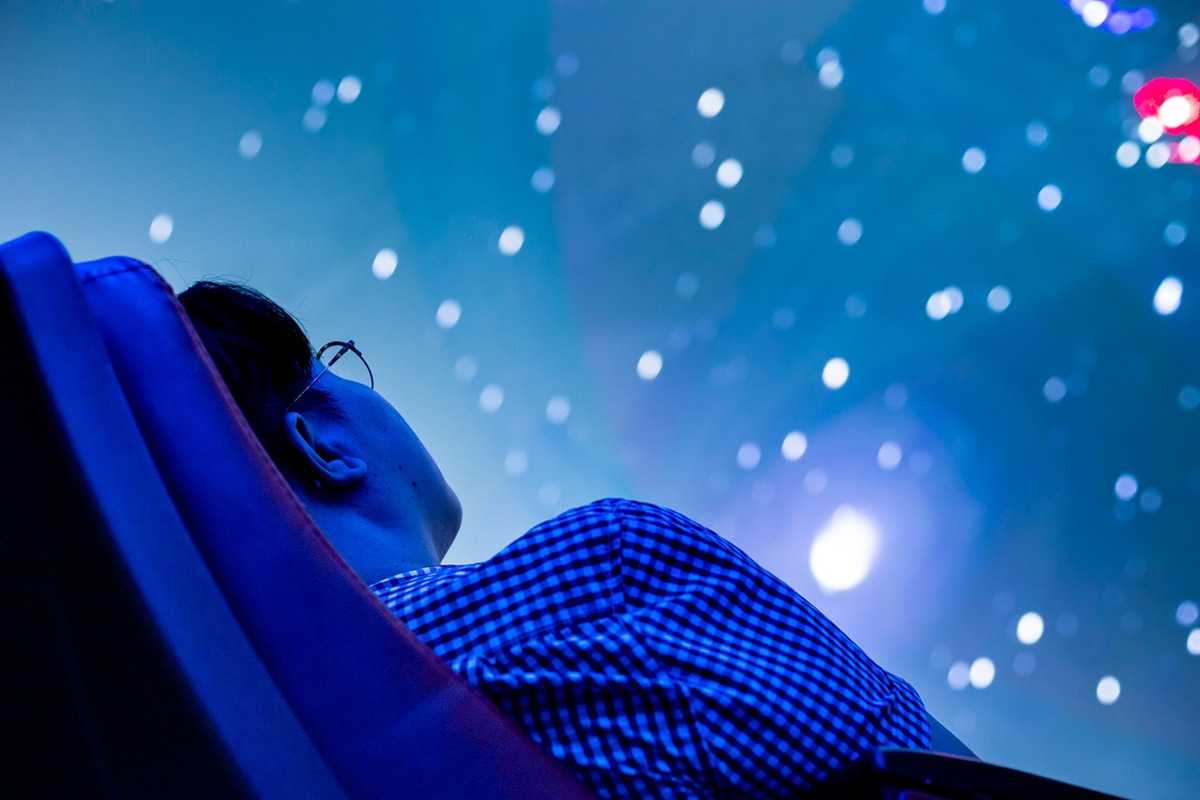 We are continually working on improving the projected image on the screen. Now that we have the best quality projection available, we turned our attention to the screen itself.

The NARIT planetarium is a treat for the ears too, thanks to the Dolby Atmos sound system. Eleven channels of spatial sound, including speakers behind the screen create a 3D effect and a subwoofer beneath the seats means the audience can feel the sound.

Speakers are attached to the dome rig with our specially designed anti-vibration fixtures, to create a perfect resonance – because every little detail matters.

All these technological innovations, and high-quality planetarium equipment, make a huge difference in visual and auditory perception, providing total immersion for astronomical and educational content. 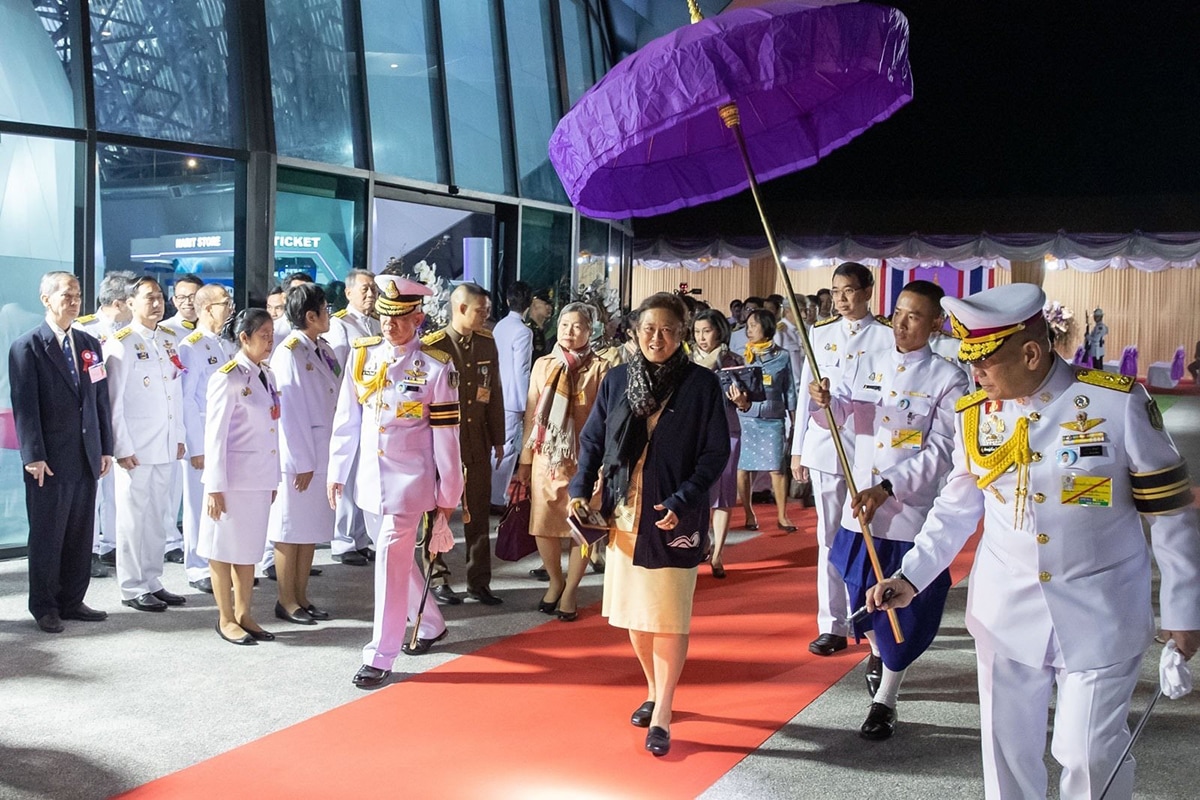 The Grand Opening of the Planetarium

The opening of the renewed planetarium took place as a part of the Galaxy Forum Southeast Asia 2020 on March 3rd, attended by Her Royal Highness Princess Maha Chakri Sirindhorn.

We are proud to participate in the building of NARIT planetarium and thrilled that Sirindhorn Astronomical Park is so popular with the local community and the tourists. All events at the planetarium were booked a month in advance!

At Fulldome.pro, we are looking forward to contributing our technologies, services, and expertise to many more projects with planetariums.

A new planetarium in Lytkarino, Russia
NEW PLANETARIUM FOR ALMETYEVSK
OUR FIRST DOME IN AFRICA
Go back